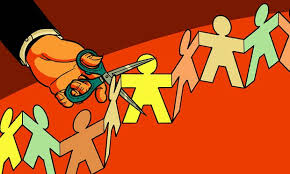 A woman was left with just £24 each week of her social security to live on after suffering a miscarriage and being sanctioned. She has told the Daily Record how she considered suicide after being left with barely anything to buy food and pay bills.

Lyndsey Turnbull told of her ordeal as the Scottish Government formally launched their new welfare-to-work programmes.

Lyndsey from Midlothian, said: “I wanted to get into work but the whole thing seemed geared up to punish those who wanted to get off benefits.”

She was on approximately £140 a fortnight Employment and Support Allowance when she missed an appointment after having a miscarriage around nine weeks into a pregnancy.

She said: “I was in a bad place and couldn’t talk to anyone about it.”

Lyndsey was sanctioned because was too distressed to disclose the reason for missing the appointment, which is absolutely understandable. However…